Nancy Jones created Thrive to be an escape for women from the stress of everyday life. (Photos by Jack Jacobs)

Two decades as a stay-at-home mom gave Nancy Jones a lot of ideas about ways she wished she could pamper and improve herself.

In December, the entrepreneur brought those ideas to life in the form of Thrive: Mind Body Soul, described as a “self-care” center for women at 4200 Park Place Court Innsbrook.

Thrive’s goal is to help women make a habit of taking care of themselves, beyond just exercise. It’s a practice made more difficult by the hectic pace of modern living, Jones said.

“People will go and exercise their body more than they will exercise their mind, body and soul. That’s just one part of the package,” Jones said. “Once you do it, you realize the value of it. But getting them to break their crazy pace for long enough to learn the value of recharging is challenging.”

Thrive is a lot of things: There’s yoga, a library, therapy rooms, a spa and seminars, to name a few of the 10,000-square-foot center’s services. There’s even a room devoted to a sandbox. It wants to be a space for women to focus on themselves, whether that means exercise, relaxation or just getting work done. 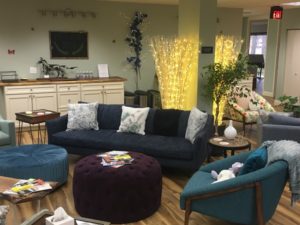 Thrive offers members a variety of ways to unwind as well as space to work.

Jones spent 20 years as a stay-at-home mom. That experience of holding down the home front at personal expense colored the offerings at Thrive. Jones also owns property management/construction firms Mountain Services in Wintergreen, and Coastal Property Services in Kitty Hawk, North Carolina. She latched onto the idea of starting a women-only self-care center idea when she moved to Richmond about a year ago. She declined to reveal how much she has invested in the center.

“I tried to put everything in here that I was lacking while I was doing all that,” she said. “It’s been a journey for me to learn about it.”

Jones decided to locate in Innsbrook because she felt it was an attractive setting for her vision. She said that previously the space was occupied by a medical supply business.

The center opened in October. Women can utilize the space through a variety of membership and access options. Jones said she has 30 members, and she plans to cap membership at 150 to 200 women. Access passes range from $15 to $85 or more. Monthly memberships run $199 to $399. There are also packages that provide access to yoga sessions, wine tastings and art sessions, ranging from $35 to $275.

Thrive has a staff of 15-20 people, which includes receptionists, managers, yoga instructors, massage therapists and other positions, Jones said.

Filling up the center with members has been a challenge in the first few months. Jones said some women struggle with a sense of guilt if they take time for themselves, and juggling kids, jobs, spouses and aging parents eats up a lot of time.

The center is open to any woman, though most of the members are entrepreneurial types, Jones said. Jones hopes to attract college students to the center to use it as a study space.

“It’s been challenging. More often than we hear ‘too expensive,’ we hear, ‘I don’t have any time,’” she said. “I’ve probably heard a hundred people say that.”