When Fortnight, the video game, announced a food-fight event between Team Pizza and Team Burger, Wendy’s launched an organic campaign to promote its burgers. Team Burger stored their meat in freezers, but Wendy’s “doesn’t do frozen beef!” So Wendy’s created an avatar on Twitch, dropped into the game, and began destroying burger freezers (rather than killing other players). For nine hours, Wendy destroyed burger freezers, promoting the mission on Twitter and inviting gamers to join. Top gamers took notice, and followers began destroying freezers as well.

Y’all keep asking, so here’s your chance.
The people in charge say if you guys can get our tweet (this one right here) to 2 Million likes, they will bring SPICY CHICKEN NUGGETS BACK.
Let’s freakin’ do this! https://t.co/qrtvWXjj9V

In May, Wendy’s said it would bring back its spicy chicken nuggets if 2 million people liked a tweet, which was also promoted by Chance the Rapper. Wendy’s removed spicy chicken nuggets from the menu in 2017, but fans started a petition on Change.org, gathering over 10,000 signatures. In celebration of the return, Wendy’s also announced that it was giving away 2 million spicy nuggets through DoorDash.

In the “Address the Future” campaign, Norwegian clothing brand Carlings and Virtue Copenhagen created an all-digital clothing collection. Followers uploaded photos, and clothes were then digitally tailored to fit so that users could share fashion looks without excessive consumption. The campaign was meant to raise awareness of the environmental waste created by fashion. The campaign took home the Grand Prix in Digital Craft at the Cannes Lions International Festival of Creativity.

People search online for help with sleeping. To assist these sleepless seekers, mattress company Casper launched the Casper Sleep Channel, which is filled with sounds, meditations, and bedtime stories, with weekly episodes narrated by June the Moon and popular podcast hosts. Episodes air across Spotify, YouTube, and IGTV.

Lyft: America Is an Idea, Not a Geography

In response to the ongoing immigration debate in the U.S., Lyft launched an “America Is an Idea, Not a Geography” campaign to share stories from its drivers, showing the real issues they and their families face today. Lyft also donated $150,000 in ride credits to support immigration organizations, including groups connected to its Lyft drivers, and asked riders to donate to RAICES (Refugee and Immigrant Center for Education and Legal Services), which provides social services, legal representation, and advocacy to immigrants and their communities.

THANK YOU guys for all the support this year. So proud to say our #BTSArmy has been nominated for the @TacoBell #BestFanArmy Award at the 2019 #iHeartAwards! RT to vote! pic.twitter.com/0HGuTs2KNj

When Taco Bell ran a campaign to find the #BestFanArmy for the 2019 iHeart Radio Music Awards, it called on social media’s biggest fan bases. Followers of BTS, the popular South Korean boy band, rose to the challenge, fighting for the band to win the award.

Continue to support one another by donating to @BTWFoundation and The Starbucks Foundation will match up to $250K. Together, we can make a kinder, braver world. 💚 https://t.co/jgZqqIDyYD

In June, Starbucks ran an #ExtraShotOfPride campaign to celebrate Pride month and support the LGBTQ community. Starbucks used quotes and stories from a diverse group of people, including spotlighting employees. Starbucks tagged posts with the hashtag #ExtraShotOfPride and popular #Pride on Instagram and Twitter. Starbucks also teamed up with Lady Gaga’s Born This Way Foundation, matching donations up to $250,000 to make a kinder, braver world.

To promote its Egg McMuffin, McDonald’s partnered with Matthieu Braccini, a 3D animator, to create a series of 15 animated gifs. The shorts reinterpret the process for creating McMuffins, highlighting essential ingredients. The campaign was awarded the Bronze Lion in Design at Cannes Lions.

Calvin Klein: I SPEAK MY TRUTH IN #MyCalvins

.@NASA let’s put a MoonPie on the dang moon pic.twitter.com/qOjejhaPvZ

With this year’s 50th anniversary of the Apollo 11 landing and NASA’s plan to return to #Moon2024, MoonPie launched #MoonPieToTheMoon2024 to get NASA to take the snack treat on the next lunar mission. In addition to the video and hashtag campaign, MoonPie also created a petition at Change.org.

Pantone Color Institute and Adobe teamed up for #GlowingGone, a campaign to raise awareness on the decimation of living coral reefs due to climate change. Design creatives were challenged to use the colors in codes #0029fd (blue), #FFFF05 (yellow), and #9007f9 (purple) to raise awareness of the threats to coral reefs. Creations were shared on Instagram and Twitter with the hashtag #GlowingGone and tag @GlowingGone. Entries were showcased in the Glowing.org gallery.

Dove teamed up with GirlGaze, Getty Images, and women everywhere to create Project #ShowUs, the world’s largest photo library created by women and non-binary individuals to break beauty stereotypes. Powered by women from 39 countries, with over 5,000 images, the project offers a more inclusive vision of beauty to all media and advertisers. To become part of the collection, women share their images through the #ShowUs hashtag. Advertisers can license the images for their authentic beauty campaigns.

Narrated by Serena Williams, Nike’s “Dream Crazier” focused on female athletes who have broken barriers, brought people together through their performance and inspired generations of athletes to chase after their dreams. The spot launched a celebration of women in sport ahead of the summer’s soccer tournament in France, highlighting a compilation of moments by some of the world’s greatest athletes, including Simone Biles, Ibtihaj Muhammad, Chloe Kim, members of the U.S. Women’s National Soccer Team, and Serena Williams.

“Boys will be boys”? Isn’t it time we stopped excusing bad behavior? Re-think and take action by joining us at https://t.co/giHuGDEvlT. #TheBestMenCanBe pic.twitter.com/hhBL1XjFVo

Gillette joined the #MeToo movement dialogue and committed to drive change with #TheBestMenCanBe. The campaign focused on men who are advocates, mentors, and leaders in their communities, actively demonstrating what it means to be a good man. Gillette also committed to distributing $3 million over the next three years to nonprofits focused on helping men of all ages to achieve their best. By rewriting its core tag, “The best a man can be,” Gillette took the initiative to join the discussion and become relevant once again. 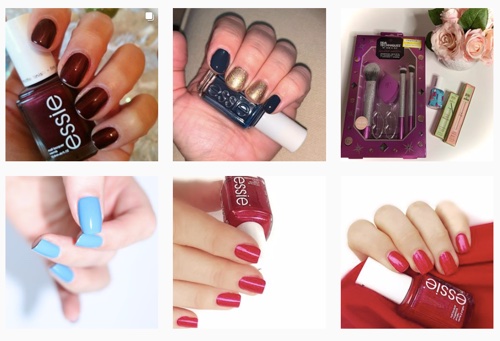 Essie is a nail polish brand for salon professionals, fashion icons, and beauty fans. Essie’s Instagram page features beautifully polished nails. Along with naming the color of the month, Essie’s page also features a simple call-to-action, “tag @essie for a chance to be featured!” The nearly 300,000 posts on #essielove show the power of a user-generated-content campaign with a creative and dedicated group of followers.