The digital transformation of commerce in recent years has led to new online marketing opportunities for trademark proprietors. The use of your own trademarks in order to navigate the consumer through the internet to your products, for example by means of SEO (search engine optimization) and keyword advertising, has certainly become a very important marketing tool nowadays. One of the unspoken rules of competition is that the entrepreneur wants to also draw the consumer’s attention to his own products when the consumer is looking for a competing product. The question of the extent to which it is legally permissible to use a competitor’s trademark for one’s own online advertising has been largely clarified by German and European case law in the field of keyword advertising. However, there are still some legal pitfalls and recent developments to be considered:

What Do you need to know about trademarks when using them for online marketing?

Trademarks are distinctive signs to identify certain goods or services with the proprietor of the trademark. They protect the specific interests of their proprietor that is to ensure that the trademarks fulfil their economic and legal functions.

General rule for legal use of foreign trademarks: when a third party uses a sign identical with your trademark in relation to goods/services which are identical with those for which that mark is registered (your products), you are entitled to prohibit that use only if it is liable to have an adverse effect on one of the functions of the mark, whether that be the function of indicating origin or one of the other functions. However, there are certain situations where a trademark proprietor cannot prohibit the use of his trademarks without his consent by a third party:

and in all cases, as long as the use does not contravene accepted principles of morality or

How to correctly use trademarks for online marketing?

Using trademarks (either third-party trademarks or your own) online ensures that potential future customers can find your products in the result list of the common search engines such as Google or Bing. There are basically four different situations in which trademarks can be effectively used as keywords and act as a “hidden navigator” through the online world:

Metatags are hidden keywords embedded in the source code of your website. They can be found by the search engine’s web crawlers that gather information from across hundreds of billions of web pages and organise it in the search index in order to then generate the search results of every individual search by a user. Metatags can be used by anybody to optimise the generic results of search engines and increase the website traffic.

What is permitted? The use of own trademarks as a metatag.

It is important to note that metatags will only help to optimise the generic results generated by search engines, but not the commercially generated AdWord results. For example, the Google search differentiates as follows between the display of the generic result list and the clearly marked Ad sections: 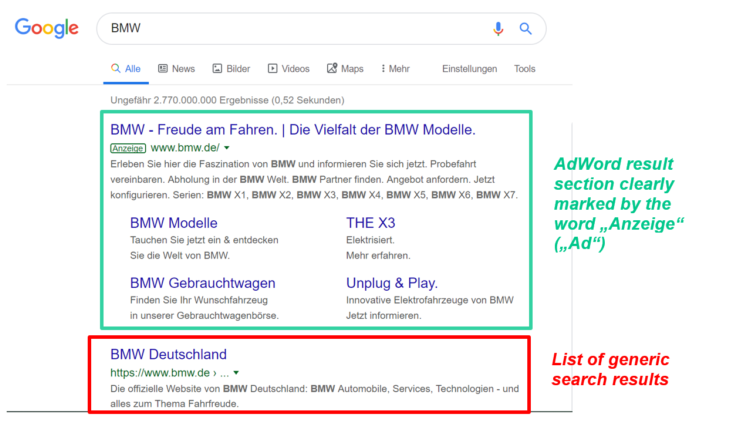 AdWords are paid keywords that are contractually defined between the provider of the search engine (such as Google AdWords or BingAds) and the advertiser. The advertisers can pay to be displayed in clearly marked sections (“Ad”/”Anzeige”) of the result page as shown above.

The use of your own trademarks as keywords;

the use of protected third-party trademarks as keywords is – if not already allowed according to the general exceptions as outlined in the beginning – generally permitted as long as:

In App stores such as Google Play Store, Apple App Store or Microsoft Store, the App developer can also contractually define certain keywords that are not visible to users, but will guide them find his App among other results in the stores. The legal situation is not finally clear yet, but some courts applied the principles of the AdWords case law also in this case. Please note that, in the past, the App Stores did not distinguish between a paid advertising section and a “simple” result list, because there are no generic search results within the App Store search engine. If you search for an App name, all Apps uploaded to the store will be crawled.

Based on that background, under the German law regime, it is permitted to use a competitor’s trademark as a keyword in the App Store, but only if:

However, this situation is not to be confused with the fact that Apple has recently implemented the so-called “Apple Search Ads” that are paid Ads allowing your Ad to be placed at the top of result results and marks them by the term “Ad” as follows: 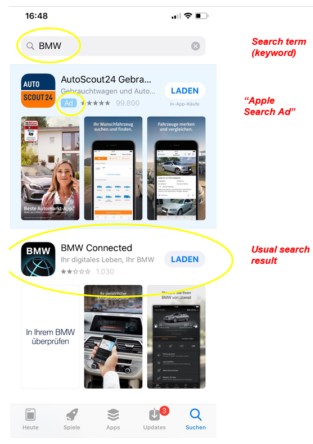 Those Ads are generated based on the keyword defined by the advertiser and entered by the user on the one hand and Apple’s collected information about the iPhone user on the other hand. Legally, it is very likely that the principles of the AdWords case law will also apply in the case of use of a foreign trademark for the “Apple Search Ads”, but it remains to be examined by the courts if this is permitted under certain requirements.

Internal search engines such as the Amazon or the ebay product search allow searching within the market place or shop for products matching the search terms. The keywords are either defined by the online shop itself or by its algorithm. Therefore, the display of third-party products – in addition to those of the sought-after branded products – is not based on the behaviour of the competitors, but on the evaluation of customer behaviour by the marketplace operator.

The question of whether it establishes a trademark infringement when the internal search engine displays search results containing the sought-after branded products and also similar competitor products, has to be decided individually for each single case. So far, the German Federal Court gave general guidance that the principles of keyword advertising are applicable and that it is relevant to look at the customer perception when he is confronted with the contested result list. Therefore, it must be examined whether an average Internet user cannot or only with difficulty recognize whether the goods advertised in the list of results in question originate from the trademark proprietor or a company economically associated with him or, on the contrary, from third parties. If the customer gets confused, such display of third party offers is not permitted.

To conclude, the modern age of digitalisation did not just bring new legal questions about online trademark infringements, but also new possibilities for online marketing and legalized to a certain extent the use of competitors protected signs for your own business objectives. The further progress of digitalisation will certainly continue to challenge the legal limits of the online use of trademarks in the future.