Parkway’s Kyle Roth celebrates as he crosses the finish line at the Mercer Count. . .

One bit of motivation was that the meet was on his home course at Parkway High School, marking the final time the senior would compete at home.

Another reason was that he wanted to continue his series of races against Coldwater’s Isaac Schoen, whom he competed against during the summer’s Mercer Health 5K Challenge.

But the most important motivation was his dedicating of the race to his late grandfather, who passed away several years ago before Roth began his running in junior high.

“He was one of the most influential people in my life,” said Roth after blistering the course to win the county race for the second straight season. “Knowing he was watching me on this course, although he’s never seen me run, it meant a lot to me to be that close.”

Early on, Roth was just a few lengths ahead of Schoen, but as he approached the final quarter-mile of racing, he had put some distance between himself and the rest of the field.

“I knew coming in there would be competition,” said Roth. “I knew at the second mile was when runners would start to feel it. I knew I had to get that distance (of separation).”

Roth crossed the line in 16:42.77, breaking the county meet record and his own personal best, although Roth said he missed the school record for a senior runner by two seconds.

“We’re trying to get them up there,” said Parkway coach Ann Vian of the team’s pack running. “Kyle and Aaron went to state (with the team) three years ago when they were freshmen and they want to go back as a team. Kyle has been there the last two years, but he said it’s not the same as going together as a team. They would like to do that one more time.”

The high school girls race was also a battle for most of the race as Coldwater’s Haley Alig was in an early pack with Celina freshman Kaylie Dameron, St. Henry’s Katie Kunkler and Marion Local’s Kelsey Broering. Alig was able to put some distance between herself and the field over the final mile to win with a time of 19:43.83, just under 15 seconds ahead of Kaylie Dameron. Kunkler was third with Broering fourth and Celina’s Joscelyn Dameron taking fifth.

“It was really good competition and I really enjoyed it,” said Alig, who finished second to Fort Recovery’s Chloe Will in the 2018 meet. “They really had me thinking how to approach the last lap so I could figure out my strategy.”

Solid pack running gave St. Henry the girls team title with 45 points as the top five Redskin runners finished in the top 17 and the top seven were in the top 24. Celina was second with 74 points to edge Marion, which tied with Fort Recovery with 79 points but won the sixth-runner tiebreaker 34-35. Coldwater was fifth with 95 with the host Panthers taking sixth with 122.

“Definitely better than county meets in the past for our team,” said Redskins coach Angie Wendel. “Kate was actually a little over a second off her PR, which is fabulous. Even at the mile, we knew she was running well.”

The county teams will be in action at the Wright State University-Lake Campus on Saturday for the annual Celina Rotary Invitational. 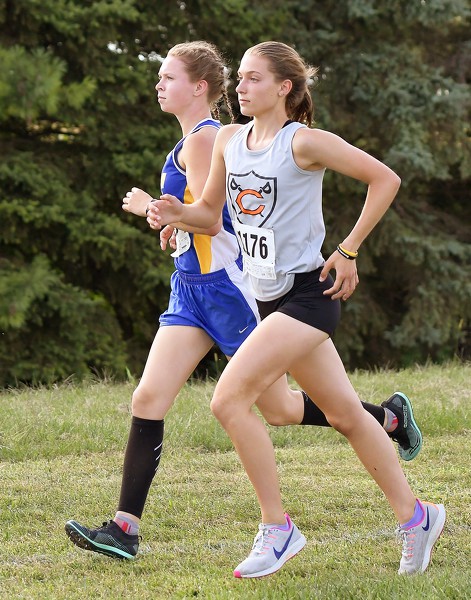 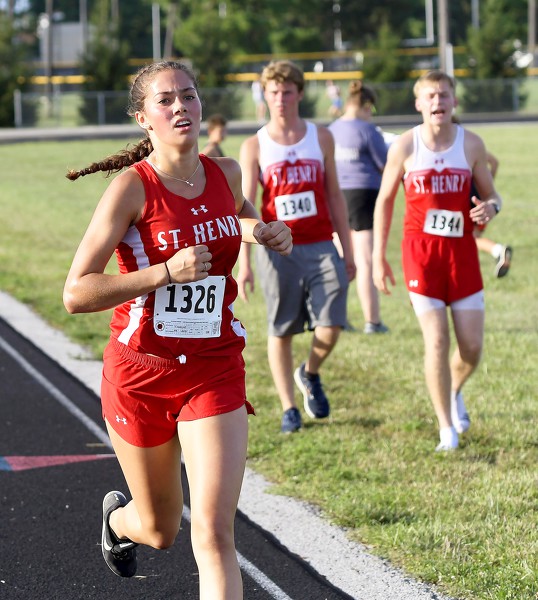