I wanted to follow up on a piece my colleague John Ewing recently put together on whether or not bettors can take advantage of bowl motivation in Week 13 of the college football season. While he looked at how teams have generally performed against the spread with a bowl game on the line, I don’t think you can treat all motivation equal.

You must look at factors such as bowl history, team experience, program pedigree, coach status, recent history and many other factors to try to determine which teams might value bowl eligibility more than others. In some cases, I truly believe some teams might not even want to make a bowl.

Let’s look at a few different motivation types in play for this weekend.

Florida State has appeared in an NCAA record 36-straight bowl games — a streak it kept alive with a one-point victory over Boston College last weekend. In order to reach the six-win mark this year, the Seminoles will need to beat Florida for a sixth-straight year, including a win on this same weekend last year in Gainesville as 4.5-point favorites. They will play their rival at home this year, but as 5.5 point underdogs.

The nation’s second longest active streak is also in jeopardy, as Virginia Tech must beat in-state rival Virginia to have a shot at keeping its current 25-year bowl streak alive. Because of an earlier cancelled game, VT still would need to beat Marshall next week to become bowl eligible (a game it won’t even play if the Cavaliers pull off the minor upset).

Kansas State will need to pull off a large upset in Ames against Iowa State in order to make a bowl for the ninth-straight year.

And lastly, as if USC needed any more motivation this week against playoff hopeful Notre Dame, the Trojans need a win to extend its bowl streak to seven years. A loss would mark the first time they haven’t made a bowl not as a result of sanctions since 2000 — the last time the Trojans lost six games in a season. 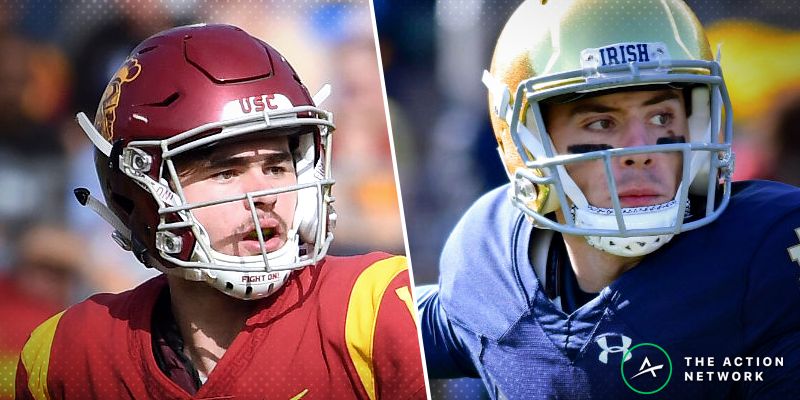 We saw how important a bowl win can mean for a program in the midst of a long drought when New Mexico State beat Utah State last year to end its 57-year long bowl winless streak.

Interestingly enough, both teams lost in this same week last year with a shot at getting to six wins. Indiana actually lost to in-state rival Purdue, which it will once again play this weekend in one of the three bowl play-in games this week. (Texas Tech-Baylor and Tennessee-Vanderbilt are the two others).

he Hoosiers will host Purdue this year, but are listed as 4-point underdogs.

Meanwhile, Colorado will have a much tougher task at Cal (-12). The Buffs will do so with interim head coach Kurt Roper after firing Mike Macyntire.

Indiana and Colorado aren’t the only teams that could potentially have extra motivation after bitter losses to miss a bowl in this same week last year. Here are three other teams in similar spots:

Western Michigan’s loss in this week last season prevented it from getting its seventh win, which ultimately kept the Broncos out of a Bowl — despite a 6-6 record. They find themselves in the same exact position this year, as they will face Northern Illinois (-5.5) at home for a shot at win No. 7.

Tulane’s bowl hopes were decided in this week last year in a game that was decided on the final play in very controversial fashion. The Green Wave (-7) can erase that bitter memory with a home win over Navy this weekend.

With a chance to secure a bowl bid, Minnesota lost 31-0 to Wisconsin in Week 13 last season. Well, the Gophers can avenge that loss and secure a bowl with a win in Madison this weekend.

Despite helping finalize the deal for the Myrtle Beach Bowl in 2020, Coastal Carolina has never made a bowl game. It can change that this weekend with a win on Saturday at South Alabama (+1.5). That would mean a lot for a program in just its second full year at the FBS level.