A college basketball season, at its core, is not much more than a calendar filled with opportunity.

Last week at Madison Square Garden for Big East Media Day, the Musketeers were picked sixth in the Big East preseason coaches’ poll and an honorable mention nod for sophomore forward Naji Marshall was the only recognition Xavier received on the preseason all-conference teams.

Head coach Travis Steele said, “Preseason rankings are what they are – it’s not how you start the race, it’s how you finish the race. For us, we try to recruit as many guys that have a chip on their shoulder. We want guys that are self-motivated that have something to prove out there and I think you see it in practice every single day… just having that chip-on-your-shoulder mentality to go out there and prove people wrong.”

Jones knew how many practices Xavier has already had. When asked if he’s excited to get going against other teams, Jones said, “Man, my excitement is through the roof. I can’t wait to play somebody else other than (Xavier’s other big man, Zach Hankins) ‘Big Spank.’ “

The same question worked its way down the table to Marshall, who leaned into the microphone and said, “I can’t wait,” an eager smile spreading over the New Jersey native’s face.

Steele said it’s hard to believe he’s a week away from his first college basketball game as a head coach.

“Seems like we’ve been practicing for a while,” said Steele. “I’m excited to play somebody else … it probably hasn’t all sunk in just yet but I’m excited about what we’re about to embark on this season.”

The composition of this team has taken root in the rebounding department and the defensive end.

“We’ll all play pretty good defense and we’re all pretty physical,” said Marshall, when asked what this team thrives on. “It’s very early and we seem to have a very tight bond … we all vibe together and play on the court well.”

Jones went on, “I feel the same way. Although he said defense and rebounding, it’s hard to tell the strength of one team right now. We’ve only had about 27 practices so far and in basketball, you have way more than just 27 practices. We haven’t played a game yet, which is real stats that’s gonna come out next Tuesday. I can’t really tell you the strength of this team but one thing we always harp on is being able to be tough on the glass and tough on every possession, and play defense.” 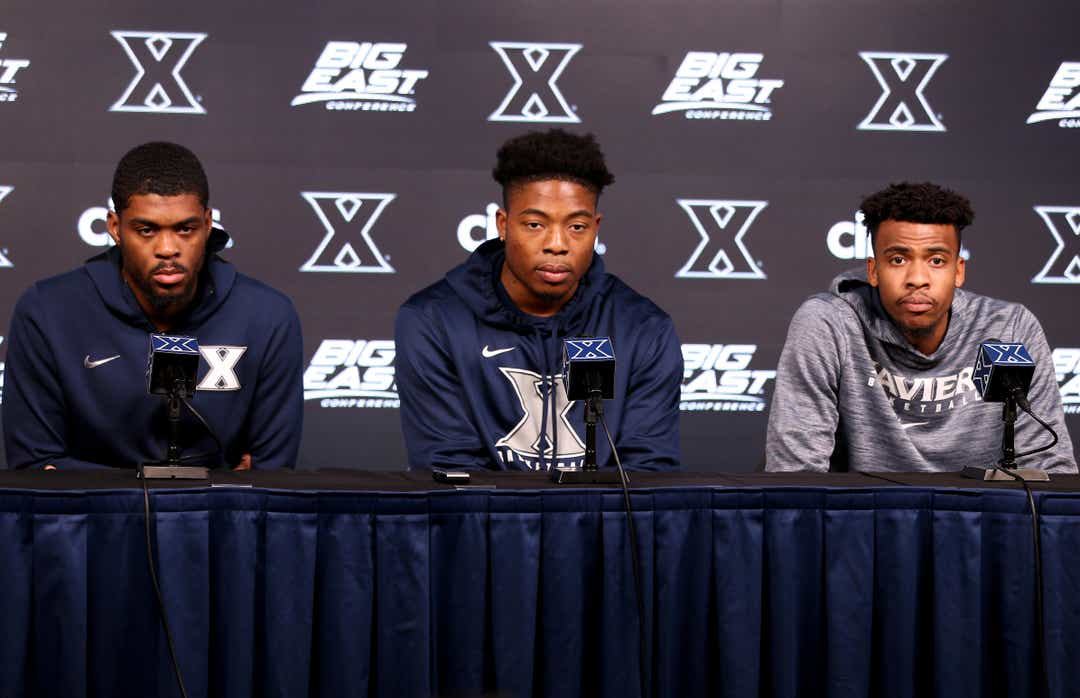 Jones did not attempt any 3-pointers last season, but he’s been vocal about his plans this season to showcase some range beyond the arc.

“Unfortunately, I missed my one 3-pointer I took in the scrimmage but you will still be seeing me takings threes,” Jones said.

Marshall and Scruggs, sitting opposite Jones, one on each side, were then asked about their confidence in Jones’ 3-point range.

“Very confident,” they both said in unison.

Jones, a big smile plastered across his face, responded, “My guys.”

“The first time I met with the team in the locker room once (Xavier athletic director) Greg (Christopher) offered me the job, I told them, ‘I’m gonna be the same person I’ve always been.’ I’m gonna love them, I’m gonna care about them but I’m gonna push them extremely, extremely hard. I’m very grateful, Chris Mack always gave me a lot of responsibility in practice … so they heard my voice a lot over the last nine years.”

Jones agreed: “Same guy since I stepped on campus. I think no matter what any Xavier practice is always gonna be competitive, gonna be tough … but the difference is now from my first two years here is just he has a bigger voice.”

The Big East portion of the schedule doesn’t start until late December, but November and early December will provide a nice look at where Xavier stands amongst some of college basketball’s elite.

After the Musketeers welcome IUPUI in the season-opener next Tuesday, then Evansville on Nov. 10, Xavier will welcome Wisconsin to Cintas Center. After that, Xavier will compete against a star-studded eight-team field in the Maui Invitational. In the first round, the Musketeers play Auburn – a team ranked No. 11 in the Associated Press Preseason Top-25 Poll – and depending on what happens in that game they’ll get either No. 4 Duke or San Diego State in the second round.

“We’re gonna get really tested,” said Steele. “We’ll see how good we are early then we obviously have at Cincinnati, at Missouri – two hostile environments which will really challenge us and get us ready to play in the Big East.”

Grad transfer Zach Hankins said Maui will be big for the Musketeers.

“A team that doesn’t have a ton of hype around it and has a lot of new people, it’s kind of a big stage to say, ‘We’re here and we’re not messing around,'” said Hankins.

“We’re very motivated this year because we know the team lost a lot of people and production from last season so a lot of people have less expectations of us this year but I think we’ve been working hard every day and Maui will be the first time this season going against some of the better competition in the country,” Castlin said.

Jones and junior point guard Quentin Goodin are both captains and they’re the two players on the roster who’ve spent the most time on Victory Parkway.

Although they were absent from the Big East preseason all-conference teams, Steele wasn’t shy Tuesday about the fact that he thinks they’re two of the best in the Big East.

“I have all the confidence in the world that Tyrique, if it’s a one-on-one matchup down there, he’s going to score or get fouled,” Steele said. “I think he can be an all-conference guy. There’s no question in my mind. He should lead the Big East in rebounding, he’s our enforcer. I think people are going to be really shocked how good he is. I think he’s more than ready to take a big step forward.”

“The ball’s gonna be in his hands a lot… I think you guys will see he’s gonna score more than he ever has and I know that just because of who we have on our team. He shoots it better than what people think, he’s worked really, really hard on his jump shot and as any good point guard does, he has to always do what the game tells him to do.”

Steele has said it early and often. Despite what everyone outside the program thinks, he expects the Musketeers “To be the toughest, nastiest team in the Big East that’s committed to getting better every day and I just want to see our guys grow, grow as individuals, grow as a team – we’ll see where that ends kind of in March and I think it will be where we want it, I really do, because I think we have the talent that we need and we have the toughness and the togetherness.”

Paul Scruggs added, “Our brotherhood is unbeatable. We have a bond like no other team has so I’ll cherish that.”