Suddenly I see… you can be a feminist AND look sexy! KT Tunstall reveals how her red-hot new look emerged from the ashes of a total breakdown and traumatic marital break-up

‘I spent my whole career fighting against wearing short skirts and underwear and now I just don’t care. I love it. It’s so much more fun being sexy…’ These are words that no one – herself included – would have imagined coming out of the mouth of singer KT Tunstall, the tomboyish, 43-year-old, Scottish-born pop star, whose million-selling smash hit Suddenly I See – used in The Devil Wears Prada soundtrack – catapulted her to fame in 2005.

But they explain the raunchy new look on her latest album, WAX, showcased here in Event for the first time: all skintight leathers, bed-head hair, toned biceps and pouting lips. But they don’t come anywhere near to explaining the journey of self-discovery that has taken the Brit Award-winning songwriter from a complete breakdown to the point in her life where she rocks back in her chair and says: ‘I’m just doing what makes me happy, and for the first time in my life I don’t care what anyone else thinks.’ 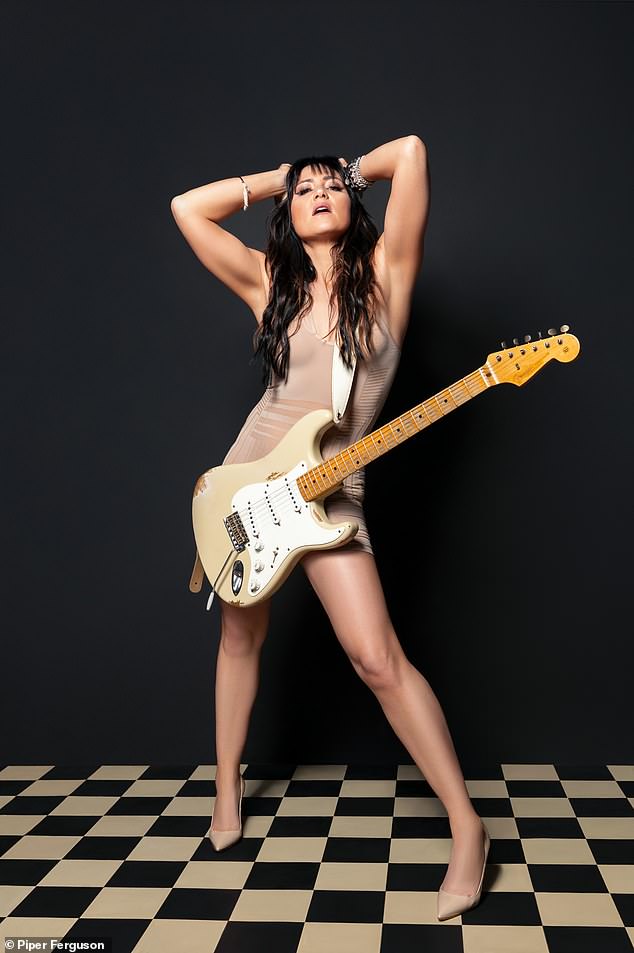 KT Tunstall was brought up in an academic household in St Andrews, where her father, David, lectured in physics at the university and her mother, Rosemary, taught at the local school

Part of her newfound joy is down to a new boyfriend (she won’t name him but he’s British and lives in Los Angeles), who has changed her life and attitude towards her own sexuality.

‘He makes me feel safe but he also makes me feel sexy, which was something I’d never felt before,’ she says. ‘When you are a musician, walking around with a guitar round your shoulders, you feel like one of the boys, and to be anything other is to sell out. I always worried that I couldn’t have integrity, I couldn’t be intelligent, I couldn’t be a feminist if I wore tight clothes and wrote sensual songs.

‘But I’ve lost all those old thoughts that I’d programmed into myself. I look at Miley Cyrus and Beyoncé and think: I get it. You can be sexy and you can still be a feminist. This is my body, I can show it off, I have a right to express my sexuality. I feel so much more confident about myself.’ She seems bemused by her own revelation: ‘I guess I never really felt like a woman before. And now I do. And I love it.’

The truth is that she has paid a heavy price to get to this point. In the past few years she has gone through the death of her father, divorce and a complete mental breakdown.

I have interviewed Tunstall many times over the years, and the last time I saw her – in Tucson, Arizona, in May 2013 – she had achieved many of her goals, having made millions from her songs while not selling out. ‘I want to stay with the mud, the grit and the dirt,’ she said. ‘I don’t want to get my t**s out. I want to play festivals, tour the world on buses, play my own bloody instruments.’

But her life was in the process of falling apart. Midway through making her fourth album, Invisible Empire//Crescent Moon, her father passed away, in August 2012, and she then decided to end her five-year marriage to Luke Bullen, the drummer in her band, whom she divorced the following May. One night in Tucson she told me she was going to change her life. ‘I have had everything,’ she said. ‘Big house in London, husband, money in the bank, career and it hasn’t made me happy. I’m getting rid of all of it and starting again.’

A few months later she moved to Venice Beach, Los Angeles and her life started to unravel as she headed for a breakdown.

‘My dad was elderly. He’d had Parkinson’s for five years, and when he died it felt like a release,’ she says today. ‘I’d spent my life challenging my dad. I was this wild, emotional kid thrown into this quiet, reserved family. They must have despaired of me because I spent years not getting anywhere and then suddenly I got successful. But I didn’t want to be that singer who showed off her body, who loved the whole celebrity side of it, the fame. I wanted to show I had integrity. But his death made me reconsider everything. I wasn’t happy in my marriage. I had tried to make it work, I’d tried to get pregnant but I had all these problems with my kidneys that I later found was probably the reason I couldn’t get pregnant. But all of that made me think I was still failing. So when dad died it felt like I’d died too.

‘I made these changes but then after I’d got divorced, sold the house and made the decision to move to Venice Beach, that was when it all hit – I have no idea who I actually am.’

At her lowest point, she spent endless nights on her own in Los Angeles crying in desperation, pacing the floors of her home, shouting out of her window: ‘Who am I?’ and refusing even to listen to music.

‘It was an incredibly unhappy couple of years but I forced myself to spend time on my own,’ she reveals today, sitting in a members’ club in London and looking significantly happier, sleeker, lighter.

‘I’d spent more than ten years of my life trying to please everyone around me. You spend your life touring and are constantly around people. I would be the one up all night talking and drinking. It’s great, but it’s also a distraction. If there’s constant noise around you, you don’t need to think. I shut a lot of it out.

‘I had a lot of therapy, I read Wayne Dyer and Louise Hay [self-development gurus] and I wrote a lot of journals, I changed my diet and followed Dave Asprey’s Bulletproof way of eating, lost a stone and slowly all the issues with my kidneys stopped.’

In the past she’s been a vegetarian and pescatarian, but these days she eats meat, avoids carbs, fruit and sugar and starts her day with a Bulletproof coffee, which includes two tablespoons of butter and coconut oil. She claims the Bulletproof diet is so good that she hasn’t had to join the gym obsessives in LA to keep her toned body. ‘I do a bit of yoga, but I swear that eating this way, I don’t need to exercise.’

She started life as Katie Victoria Tunstall and was just days old when she was given up for adoption by her half-Chinese mother, who had been working as a dancer in an Edinburgh club when she became pregnant after a relationship with a barman. When she was 23 she tracked down her natural mother, who has since remarried, but it is the Tunstalls – her adoptive mother and father – she considers to be her parents.

‘I did once try to find my dad, but I gave up,’ she says. ‘It would be interesting to meet him, but I feel no sense of loss.’

She was brought up in an academic household in St Andrews, where her father, David, lectured in physics at the university and her mother, Rosemary, taught at the local school. There was no television or music in the house as one of her two brothers was profoundly deaf. She taught herself to play instruments, joined the local theatre group and read non-stop, from novels to biographies of her heroes including Bob Dylan and Joni Mitchell.

She was smart with a cynical sense of humour, and at a time when female power artists such as Britney Spears and Beyoncé dominated the charts, she wanted to rebel and be an old-style troubadour. ‘All I know is about giro cheques, buses and cooking rice to last the week,’ she laughed when I first met her, just as her debut album, 2004’s Eye To The Telescope, took her from a ‘commune’ in Fife surviving on a weekly dole check and ‘nicking vegetables from the farmer’s field next door’ to wowing the Grammies aged 28 with her hit Black Horse And The Cherry Tree.

She’s transformed today. The angst has gone. But why was she embarrassed about making millions from her music and why did she avoid red carpet parties and playing the fame game?

‘I have no idea. I hated all the parties and the dressing up. I hated being treated like a celebrity and today I think, just go for it. Enjoy it. Stop worrying.’

So now she’s found happiness with her new man, does this mean a fairytale ending with wedding bells and baby grows? She shakes her head. ‘Absolutely not. I don’t want babies. I know that now and I don’t want to have a baby just because I feel that would make other people happy.’ 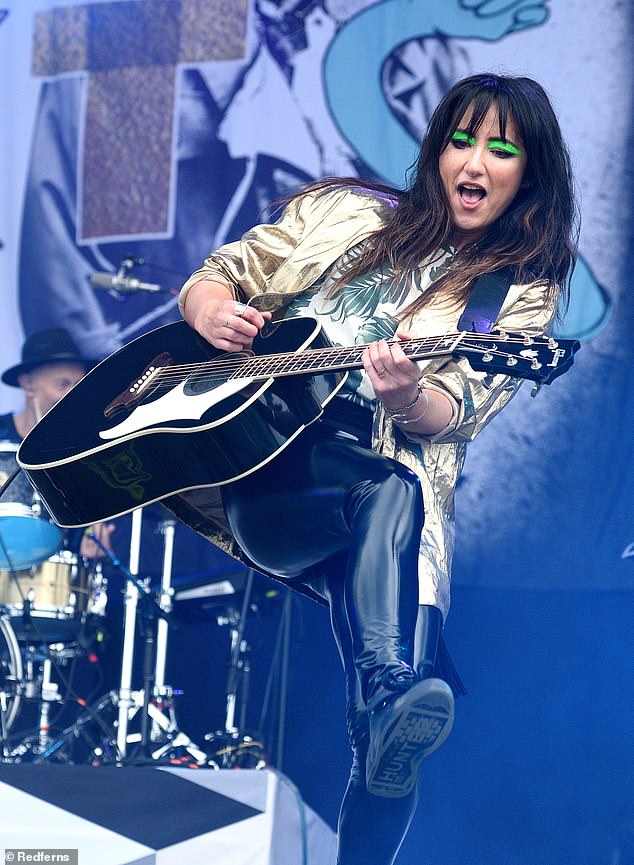 ‘I hated all the parties and the dressing up. I hated being treated like a celebrity and today I think, just go for it. Enjoy it. Stop worrying,’ says Tunstall

But Tunstall has embraced her changes passionately – and she’s evangelical about her new gypsy lifestyle.

‘I’m not going to stay in Venice Beach. I’ve loved it. It’s been a huge part of me changing, but I will always keep on moving. I’ve already decided to move on, maybe Montana. I’m enjoying my life, enjoying my body, showing it all off while it lasts.’

And what if her sexy new image provokes a backlash from fans? ‘I don’t care, I’m enjoying not caring what anyone else thinks. If this album has a message, that’s the most important one I want to pass on.’

KT Tunstall’s new album, ‘WAX’, is out on October 5 on Virgin. Her UK tour starts in March, kttunstall.com