When Hong Kong-based photographer Xyza Cruz Bacani started making street photographs, she read about the subject on social media and saw a lot of arguments about rules, and about the definition of the genre. At first she thought parameters might be good for her as an emerging photographer. But before long, she said “fuck the rules.” What appealed to her about street photography was that it’s “very freeing. It’s up to you what you really want to photograph, it’s how you see the world.”

Bacani says she got into street photography “because it was free. You just need a camera and good shoes.” She had a full-time job, and street photography let her hone her skills in her spare time. She also says “hunting” for images is “a very good stress reliever.” While Bacani views her work as a historical record, she says, “I just do it because I love to do it and it’s something that makes me really happy.”

New York-based photographer Joseph Michael Lopez was inspired by Danny Lyons’ book Knave of Hearts, in which he describes “how he grew into a photographer.” From Lyons’ book, Lopez figured out that he needed “to work on knowing who I am, and the only way I was going to figure that out is by throwing myself out in the world.”

Groskopf says she started making street photographs to get out of the house during a year when she felt lost and discouraged. She published images on Tumblr, and connected with other street photographers. “I got into great relationships when I was alone. I felt a part of something and that was a big motivator,” she says.

New York-based photographer and director An Rong Xu says all his work is driven by “the idea of love and passion.” “My work deals with this sense that I’m always chasing after something, this sense of loneliness and trying to understand my place in this world. And this longing for something—I haven’t even figured out what it is.”

Melissa Breyer, who is based in New York, says her photos are a continuation of her painting, which is focused on portraiture. “I love this idea of presenting a figure that comes with an open-ended narrative,” she says. She also likes to find ways to isolate people on the street. “The city is just so chaotic and crazy and noisy; to zero in on single quiet moments feels almost like a necessity for me.” 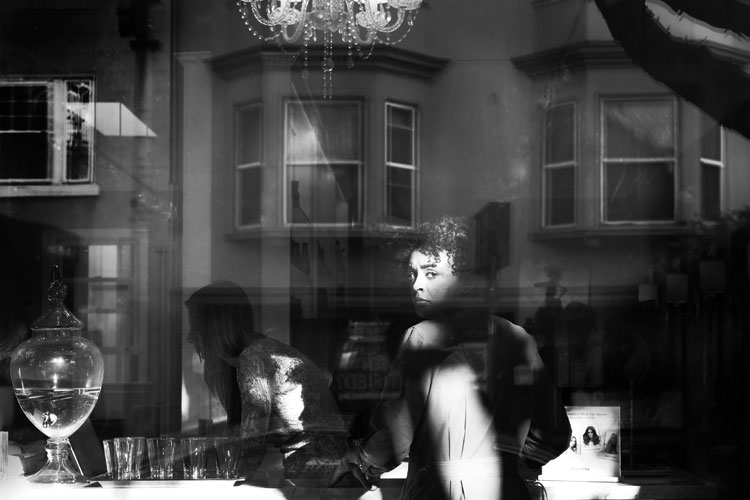 Melissa Breyer plays with light and shadow, texture and mood. “I love this idea of presenting a figure that comes with an open-ended narrative.” © Melissa Breyer

There’s a common misconception that street photographers are simply capturing what’s in front of their cameras—that their images are taken rather than made. Los Angeles-based photographer Ibarionex Perello says what he admires about street photographers is their artistry: They take disparate elements and bring them “together in the composition and the frame, building a relationship [between them]” that creates “a really interesting photograph.”

He urges students in his workshops to think graphically. He tells them to consider street photography “as a form of abstraction, as a way of being able to step back and think about how all of those elements will play within the context of the frame.” You have to be attuned to shape, light, line, color and gesture, and how they interact. “What I try to teach in my workshop is this way of seeing: seeing a scene, taking it apart, and putting it back together, and seeing what you need to include in the frame, and what you need to exclude, in order to make it an effective photograph.”

Powell teaches a similar approach to his workshop students. He’ll see something—“a piece of light hitting a corner” or “a character wearing something” interesting—that he wants to “work.” He’ll pre-visualize what he wants to have happen in a scene in order to make an image, he says, and often those things will happen. He explains, “It shouldn’t be: ‘That’s cool, let me point the camera and press the button.’ It should be: ‘How do I put it in a context, and control as many things as possible?’” Powell encourages students to “really think about yourself as the author of these pictures as opposed to being somebody who’s just using the camera to replicate things. Make a new idea or new thing.”

One useful practice is to “sketch,” he says. Like painters making preliminary drawings, photographers should “be willing to take the camera and grab little things, knowing that’s not going to be some great picture, but being as open as possible and have small things prompt you.” Then, he says, “live with those bad pictures, where you were in the wrong spot, the light was off, [you had] a tech problem, or it could be just a messy frame. For any number of reasons, it could be off, but it’s still a sketch, and there’s something in it that you could learn from.” 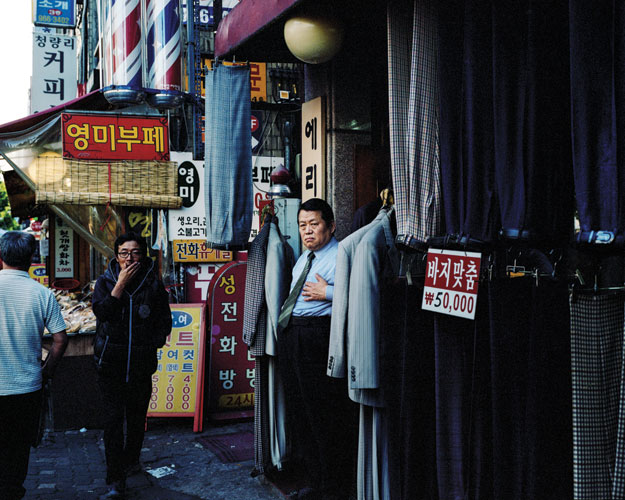 Seoul, 2016. An Rong Xu says his photography is motivated by “this sense of loneliness and trying to understand my place in this world.” © An Rong Xu

Some photographers choose to interact with subjects, but many street photographers want to capture something candid. Breyer says she dresses “pretty quietly” and shoots from the hip to stay discrete. “I don’t seek interaction at all. If someone notices, I’ll smile and nod and keep moving.”

Perello prefers to hide in plain sight. When he finds an interesting scene, he’ll position himself and wait “for someone to come into it. People have already seen me from a distance away…. They have no idea that I’m waiting for them. I’m already a presence. I’m not invisible, but they’ve already seen me, they’ve already determined what I’m doing, and assumed I have no relationship to them at all.”

Being on the street with a camera can lead to confrontations, and that can make photographers self-conscious. Photographers say that fear doesn’t go away, but Xu says, “You just get a little braver, and you’re more willing to put yourself out there.”

Oftentimes, it’s people who aren’t even in a photograph who end up confronting a photographer. “They want to be the ethics police,” Perello says. Breyer says she gets “a lot of grief” from security guards in public places she likes to photograph, such as lobbies of buildings in Manhattan or Grand Central Station. “Security in general all over the city is becoming more intense,” she says.

Several of the photographers we spoke with say that their intentions for their work have a big effect on their interactions with people. “If you’re not honest with yourself [about why you’re making the work], or you’re scared, or feel like you don’t belong there, people pick it up, and they get threatened, because you’re not comfortable,” Lopez explains.

“You need to think about the spirit you’re doing it in, whether you’re making fun of something or you think it’s beautiful or funny. If it’s mean, then don’t do this,” says New York-based photographer Melanie Einzig. “Sometimes I feel protective of people I photograph.” She’s had images go viral and people make negative comments about her subjects. She also turned down a request from Comedy Central to use an image for a joke.

Powell says his mentor, Joel Meyerowitz, taught him to project joy and “that you are doing work that affirms something that you think is beautiful, wonderful or compelling in the world, whether it’s a person or a blue wall,” he says. If someone approaches him, his response is sometimes “as simple as a huge smile and saying: You look beautiful, it’s a fantastic day. That projection of positivity—genuine positivity, it’s not bullshit—is incredibly defusing and honest.” 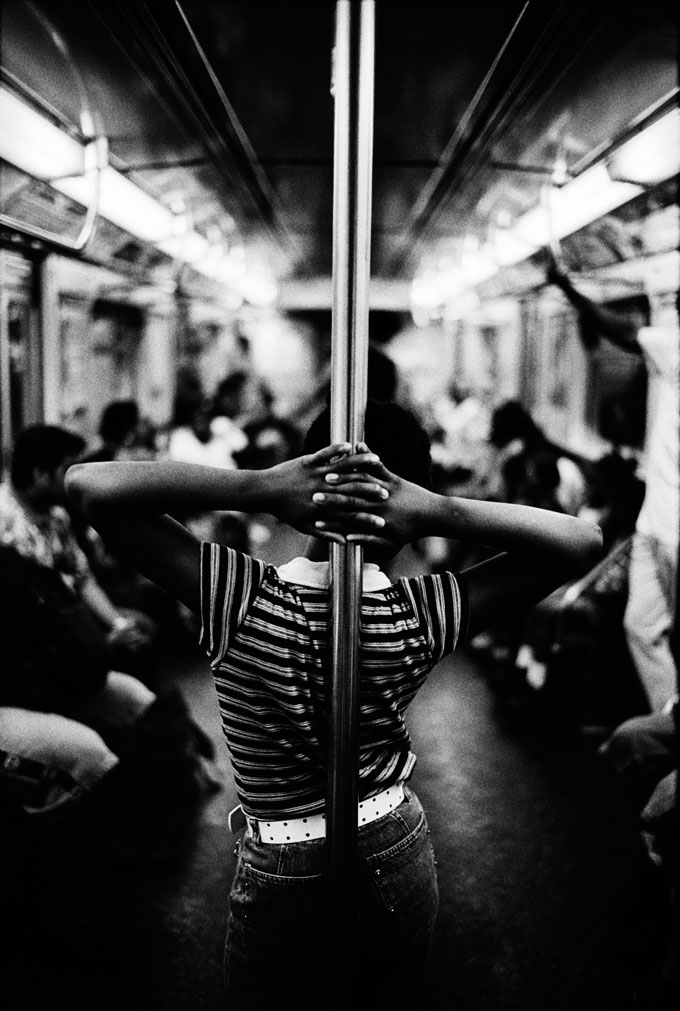 “If you’re looking for success, you’re going to fall on your face,” counsels Lopez. But it is possible to parlay street photography into paying opportunities—commissions from editors and brands, for instance. “Those of us who work this way and work really hard, we’re at the gym all the time; this muscle is being flexed to organize things quickly and intuitively,” says Powell. “When I show my work—and I’ve done a lot for magazines, fashion, some advertising, book jackets—what I talk about is that I’m a photographer of experience. I photograph life being lived in public space.”

Groskopf has worked for VICE, Refinery29 and Bloomberg Businessweek, among other clients. “Editors at magazines and brands are excited about getting out of the studio, so it’s a good time for street photographers if you have vision and you can articulate it,” she says.

Bacani has gotten commissions from museums and has gallery representation for her street images, but she’s also repped by Redux Pictures for her documentary photography. “Street photography is a very good foundation for documentary works,” she says. “When you go out and are able to photograph ordinary moments in life and make it visually appealing, I think you can do that in a more controlled environment.”

Perello believes it’s hard to sell prints “unless you have a big name, because not a lot of people want to have photographs of strangers up on their wall.” But the skill of making compelling photographs “from things that most people would never consider photographable or photo worthy” has a lot of applications. For instance, he has been hired by NGOs to document their work. He can apply his street photography skills to “an environment that’s more structured, that has an end goal, and use those same goals in service of an organization that compensates me.”

Want more PDN? Click here to sign up for our email newsletter and get the week’s top stories delivered straight to you.

Related:
Photographers on What “Street Photography” Means to Them

Q&A: Alex Webb On Street Photography as “Exploration and Discovery with the Camera”

How to Land Work with Refinery29

The Heart of Jamel Shabazz: Making the World a Better Place Through Photography