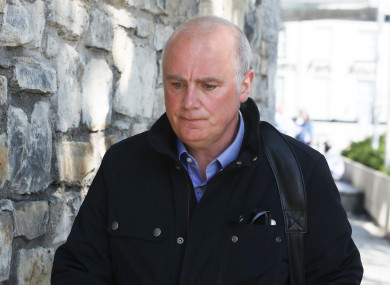 DAVID DRUMM ANSWERED Ireland’s call when it was made to him, and did not engage in any hookery or crookery, his barrister has told a jury at Dublin Circuit Criminal Court.

Closing speeches concluded today at the conspiracy to defraud trial of Anglo Irish Bank’s former CEO, which has been running for the past sixteen weeks.

“Nobody lost, nobody gained, nobody got rich, nobody got poor, and nobody is living on a Caribbean island with ill-gotten gains as a result of these transactions,” Brendan Grehan SC, defending, said.

Drumm (51) of Skerries, Co Dublin, has pleaded not guilty to conspiring with former bank officials Denis Casey, William McAteer, John Bowe and others to defraud depositors and investors at Anglo by “dishonestly” creating the impression that deposits in 2008 were €7.2 billion larger than they were.

The former Anglo Irish CEO has also pleaded not  guilty to false accounting on December 3, 2008, by furnishing information to the market that Anglo’s 2008 deposits were €7.2 billion larger than they were.

Counsel said Drumm answered Ireland’s call when it came, donned the green jersey and didn’t desert his post at Anglo.

“Judge him with what confronted him at time, not with 20:20 armchair hindsight,” Mr Grehan told the jury.

He said the eyes of the Financial Regulator, the Central Bank, PWC and Anglo’s auditors EY passed over the transactions prior to their publication yet nobody raised a red flag.

“When it became apparent there was a problem, people immediately started running for cover because nobody wanted to be a part of this when things turned sour,” he said.

He said the titans of industry and the wise men who sat on the bank’s audit committee “missed” the transactions, yet David Drumm is criminally liable for them.

Yesterday, lawyers for the State told the jury that Drumm had engaged in a massive con, and said the accounting scheme used in the transactions was fraudulent and dishonest.

However Grehan said the case lacked all the hallmarks of conspiracy.

He said it contained no trickery, no deception, no skullduggery and no secrecy.

“There was nobody standing over a shredder at Anglo, no whistleblowers saying they saw what happened and were then told to move to different job when they put their hand up,” he said.

“The calls are not Mafia Dons discussing a crime with a bug underneath the table. They contain evidence of the transactions but not of conspiracy,” he said

He said his client acknowledges the preliminary accounts published in December 2008 should have included a note alongside the figures, explaining the transactions more clearly.

But there was no crime, no fraud, no false accounting, no evidence of anyone having been mislead and therefore there was no conspiracy, he said.

“David Drumm is not proud of every decision he made, but he made them in good faith with no criminal motivation, while trying to save the bank,” Mr Grehan said.

On the opening day of his trial, Drumm accepted that the multi-million euro transactions took place between Anglo and ILP in 2008 but disputes that they were fraudulent or dishonest.

Judge Karen O’Connor told jurors that she will commence her charge to them on Monday, prior to the commencement of deliberations in the case.

Comments are closed for legal reasons