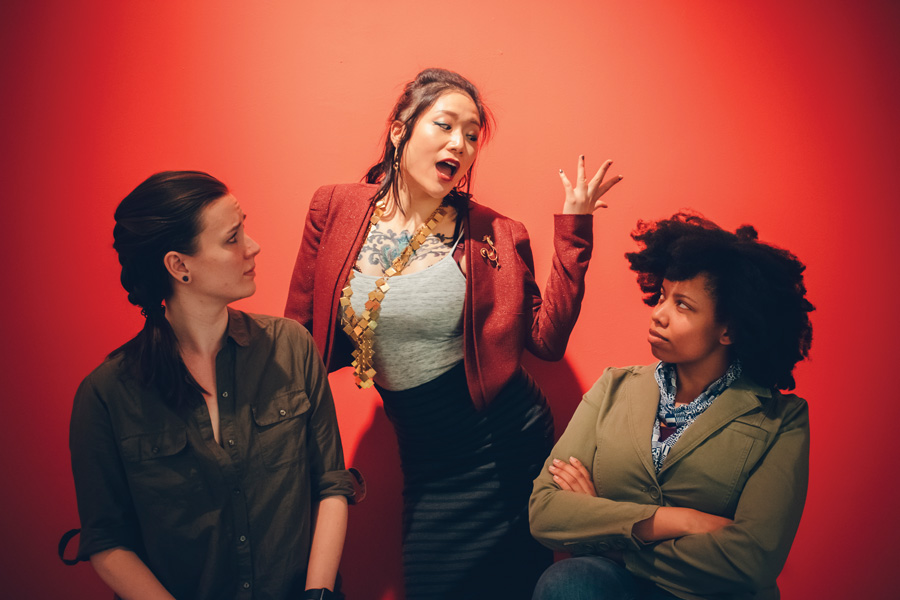 In a world oversaturated with TED Talks, panels and podcasts intended to transform ways of thinking, many rely on these self-help tools to successfully navigate through life. Nonprofit Chicago-based theater organization Nothing Without a Company investigates this phenomenon in its production of “Cornerstone.”

The show opens April 5 at Artspace 8 in Chicago and runs every Thursday through Sunday until April 29. The piece is an immersive theater production in which audience members attend a seemingly regular seminar hosted by an eponymous self-help organization.

Kenya Ann Hall (Communication ’15) said Cornerstone, the made-up institution hosting the seminar, is an organization that aims to help the audience “throw away limitations” to “actualize their full potential.”

“The audience is supposed to be experiencing (the play) … just walking into something that appears to be a lecture, but might also be something much more sinister than that,” said Hall, who plays a skeptical audience member.

Hall said some of the audience members, including herself, are actors pretending to be Cornerstone initiates or longtime customers. However, this distinction is not made clear from the beginning, leaving spectators on edge. Through this uncertainty, the play aims to make the audience question the believability of the information presented and ponder the prevalence of mob mentality, she said.

Co-artistic director Hannah Ii-Epstein said the play is based on the experience of company ensemble member Jake Fruend, whose friend joined an organization very similar to Cornerstone. After attending a seminar hosted by that organization himself, Fruend witnessed first-hand the organization’s persuasive tactics, noting its resemblance to “a cult or pyramid scheme.” This sparked his initial conception of the play, Ii-Epstein said.

The production involves a unique amount of audience participation, Ii-Epstein said. Attendees can roam their environment freely and interact with actors or just sit and watch the show unfold. Similarly, the cast is influenced by the audience as well. This strays from the traditional, more detached style of enjoying theater, Ii-Epstein said.

“We’re flipping theater on its head. … We try to allow our audience to really be more into the show,” she said. “If they said something it might change the way the show works. So it’s the idea that you’re not seeing, you’re experiencing.”

Ii-Epstein and Hall said the name Cornerstone falls in line with the architectural language that is harnessed in the script. Both said the concept of a cornerstone — which is used to form the foundation of a building — reflects the central idea of helping the audience discover their principles and reach their maximum potentials.

Playwright Kevin Sparrow said much of the script was created in collaboration with the actors, and together they worked from design books to apply the language of construction to self-help speak. When asked how the idea surfaced in the first place, he said the architecture motif has been integral to much of his writing and poetry.

“When you live in a city, it becomes difficult not to think about what is constructed around you and the idea of construction — what goes into your life and what constructs it socially as well as physically,” said Sparrow. “If I’m thinking of that kind of thing as a theme, it becomes a really easy visual for me to grasp onto.”

ASG elects freshman Adam Downing as speaker of the Senate