SEOUL, March 8 (Yonhap) — South Korea’s government decided on Thursday to place one midsize shipbuilder under court receivership and told another to implement a self-help program as part of its broader effort to streamline the ailing shipbuilding industry.

In the latest financial assessment of Sungdong Shipbuilding & Marine Engineering Co. and STX Offshore & Shipbuilding Co. (STX O&S), creditors such as the state-run Korea Development Bank (KDB) and the Export-Import Bank of Korea (Korea Eximbank) reached the conclusion that Sungdong Shipbuilding should be placed into court receivership. They added that STX O&S must come up with a “stringent” self-rescue plan that has the backing of the company and its union within one month.

The KDB is the main creditor bank of STX O&S, and Eximbank holds the largest amount of shares in Sungdong Shipbuilding.

Earlier in the day, the two lenders held a joint press conference to outline their plans for the future of the shipbuilders.

“Given its current financial status, Sungdong Shipbuilding is set to face bankruptcy during the second quarter following a severe credit crunch. Any fresh injection of funds into the company will be irrecoverable due to its deteriorating competitiveness,” Eun Sung-soo, chairman and president of Korea Eximbank, said in a press conference.

In this photo taken March 8, 2018, Eun Sung-soo, chairman and president of Korea Eximbank, delivers a briefing on the fate of Sungdong Shipbuilding & Marine Engineering at a press conference held in Yeouido, Seoul. (Yonhap)

The review by EY Han Young accounting-consulting firm found Sungdong may be able to survive if the company cuts 40 percent of its workforce and creditors are persuaded to inject fresh funds, the statement said.

Under the creditors-led restructuring that began in April 2010, a total of 2.7 trillion won (US$2.5 billion) was poured into the shipbuilder, resulting in no tangible results. It won only five ships in 2017, sharply down from 43 in 2013 amid a slump in oil prices and a slowing global economy, it said.

“The court-led restructuring will seek drastic downsizing, debt rescheduling and an aggressive asset sale, which may lead to M&As or business conversion,” Eun said.

He expected Sungdong to file for court protection in one or two weeks.

In regards to STX O&S, KDB said the current business portfolio and high cost structure will not guarantee the shipbuilder’s survival. The policy lender gave a one-month ultimatum to the company and its union to agree on the sale of non-core assets and steep fixed cost cuts, the statement said. The deadline has been set for April 9.

The company needs to focus on winning valued-added ships such as liquefied natural gas and liquefied petroleum gas carriers for a turnaround, it said.

“If (STX’s) labor and management fail to reach an agreement on a package of drastic self-help measures by the deadline or the measures do not meet the creditors’ requirements, the company too will be placed under court receivership,” KDB Chairman and Chief Executive Lee Dong-gull said in the press conference

Even if STX O&S and its union agree on a new self-rescue plan, creditors are not planning to inject any fresh funds into the company, he claimed.

STX O&S, once the world’s fourth-biggest shipbuilder by orders, was put under court receivership in 2016 but “graduated” in September 2017 when its debt-to-equity ratio improved to 76 percent from a state of capital erosion in May 2016.

However, shipbuilders, including STX O&S, have been struggling with declining orders amid a global economic slowdown after they were hit hard by the 2008 financial crisis.

South Korea has some of the world’s leading shipbuilders, such as Hyundai Heavy Industries, Samsung Heavy Industries Co. and Daewoo Shipbuilding Marine & Engineering Co. In recent years, their smaller rivals from China have been rapidly catching up in areas including commercial ships, bulk carriers and container vessels. 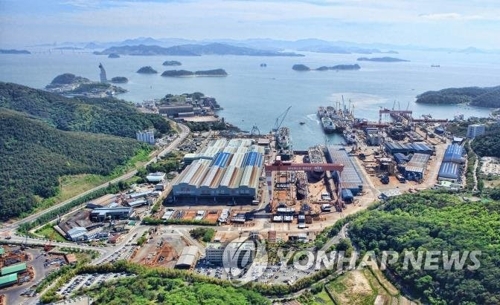